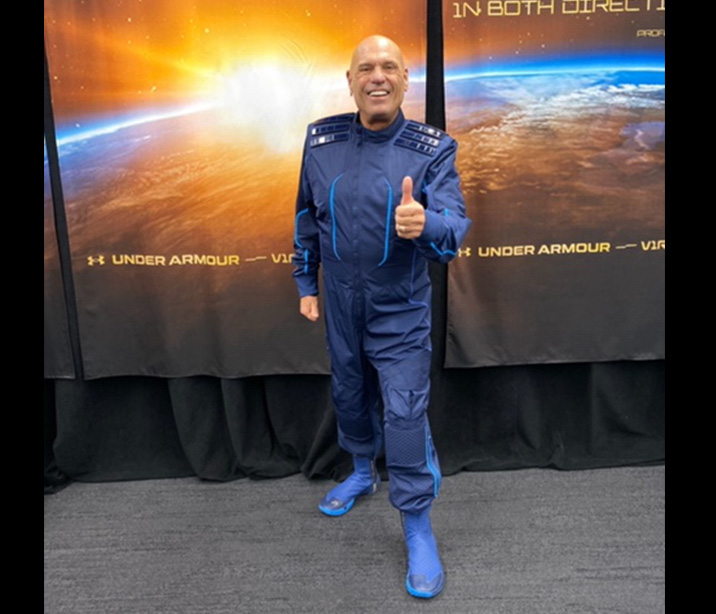 FUN IN THE SIMULATOR

Hello again it’s Rocketman, Ken Baxter, reporting  from the city of Baltimore, where my I joined my fellow astronauts for two very intense days preparing for my long awaited trip to space!

We arrived at the Founder’s Forum on Tuesday, November 12th, and it was nonstop mission preparation for two days…except for that tour of the Sagamore Spirit Distillery.

On Wednesday morning we left via water taxi to a warm welcome at the Under Armour Campus to begin this portion of our mission training. You may have heard that the UA team was selected to provide our inflight space suits and gear.

Day 1 began with a health check and a physical fitness evaluation – which I passed with flying colors – followed a fitting for the gear I will be wearing into space.

The new Under Armour design has a great look and is made from a variety of materials that have been rigorously tested in spaceflight-like environments. The UA team took my unique measurements and the suit will be personally tailored to my body as well as the boots.

Most importantly, we also received a program update we were all anxiously awaiting – I can’t tell you too much about that right now, keep checking back to my blog for the latest.

On Day 2 I learned more about what to expect when the big day arrives. It seems like yesterday that I watched that episode of 60 minutes in October 2004, the next morning I asked my assistant, Robin, to contact Sir Richard Branson at Virgin Atlantic. I was blown away when he called me back on his cell phone! It was then I told him I was all in, taking a leap of faith and purchasing the VERY FIRST ticket on the fledgling Virgin Galactic! Now the day is drawing near and there is much to learn before takeoff! The best part was the flight simulator which took me to an altitude of 120 kilometers – that’s 75 miles! What a rush that was.

We learned a lot from several speakers about what the actual journey would be like, what we can expect when we get to New Mexico and important details including flight familiarization. Each day began at 5:00 am and ended at 10:00 pm. I can tell you I am even more excited than I was – and more than ready for launch!

As you can imagine, when the latest astronaut update arrives from Virgin Galactic the excitement builds. Please check back often for new mission updates and share in the journey of the first average guy’s trip to outer space!

VSS UNITY Returns with Three on Board

Spaceflight Planned For This Year